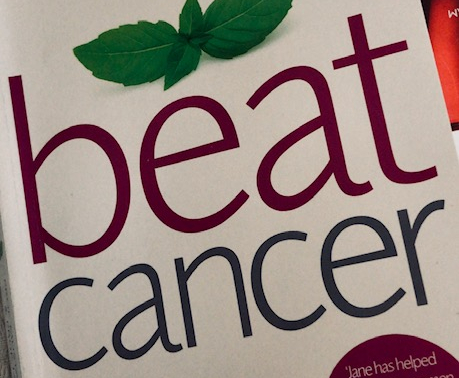 My father has had his treatment discussion with the oncologist and chemotherapy starts next Friday. To be honest, I was expecting our Virtual Meeting to be a bit hopeless. A bit, “There’s nothing we can do Mr T. Sorry about that old chum!” But it wasn’t that bad.

It was still bad, just not as book-the-funeral-bad as I thought it was going to be.

Maybe it’s the fact that these oncologists are used to delivering bad news, so even when it is bad it sounds fairly positive and drizzled with a little bit of hope. And, when you’ve had a few weeks of imagining the absolute worst, a drizzle, a sprinkling or even a dusting of hope is the lift you need to simply crack on.

So, with an either real or perceived (and who actually cares!?) dusting of positivity still freshly tickling my somewhat erratic attitude, operation “Save Dad” has begun.

I have bought a number of books online. They have rather un-cheery but no nonsense titles, like “How Not To Die”, “Beat Cancer” and “Foods to Starve Cancer”. They all seem to promise an end to uncertainty and are simultaneously boosting my hope levels whilst plunging me into depths of panic.

So far, I have bought coconut oil, red palm oil, nuts and seeds (all on order online), almond milk, spinach, kale, celery, cucumber. I’ve bought a NutriBullet machine and fresh ginger. I’ve stopped him from eating bread and sugar and as he has based his entire diet around bread, this is a massive shock to him. I have a feeling I may be disinherited, but I’ll take that risk. I feel like I’m in a fight or flight mode right now. Or both. I don’t really fully understand what I’m doing, and there is so much conflicting information out there, that one day I feel confident I’m making the right choices for him, but the next I feel like a complete amateur and like I could potentially be harming him. Meat and Keto diet versus vegan. Meat bad. Dairy bad. Carbs bad. Meat good. Meat very bad. Sugar is the f***ing devil. Every documentary has me believing “This is it! This is the answer!” until I watch the next documentary and I believe that one too. 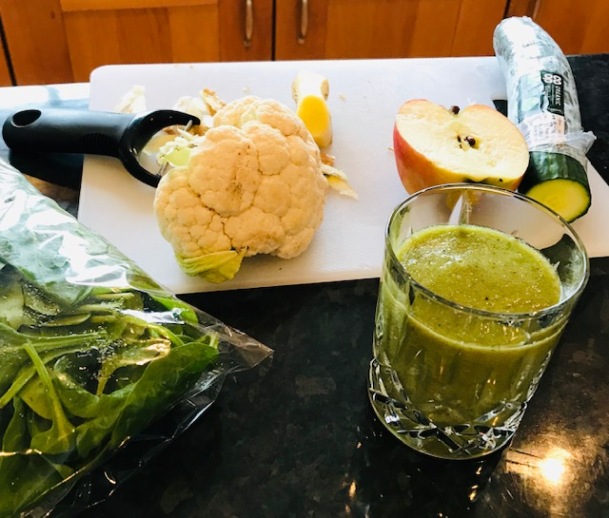 Have you ever felt completely and utterly out of your depth? Like a fraud? In the wrong place? The wrong time?

I remember changing schools when I was about 11. The new school – a girls’ school – had Latin on their curriculum. My Latin teacher was Adrian Edmondson’s mother (apparently! Or so the in-girls whispered) – Ade Edmondson from the Young One’s fame. I sat in those Latin lessons feeling like I was in a different world. A world that everyone else seemed to understand, but which was completely alien to me. She had enormously thick glasses, Mrs Edmondson. I hoped she couldn’t really see me through her thick lenses. I hoped she’d forget I was there. And, I faked it. I smiled. I tried to look like I understood what was happening. But, I was seriously beyond my depth.

What I could really do with, is a good chat with my mum. I have no doubt she’d help to decipher the information and help me to make a decision as to what to do for the best. She always seemed to know stuff. Or maybe that’s a mum thing?

The girls and I walked the dogs yesterday. We walked past Mum’s care home and were pleased to see her bedroom curtains were open. A good sign at least that she was up. Or had been prepared in some way for the day. We called out, “Morning, Granny!” as loud as we could. Knowing that even if our voices travelled through the small gap in her bedroom window, she would not hear us, or recognize us, or recognize the words. Instead, we were very confident that she was very probably lying in bed, her tiny frame curled up, her wrists and joints swollen and fused at awkward angles. Her eyes, closed most probably. Her mind elsewhere. Hopefully somewhere pleasant. A fond memory. A fantastical world. A world no one else has visited for a number of years now.

I have been searching for recipes. Vegan recipes. Or at the very least recipes packed with vegetables and goodness. Clearly there are a zillion experts online, but I have also had a look through Mum’s recipe books. It is a bit of a guilty pleasure. A treat. Seeing her writing – her beautiful writing – before dementia started to mess with her brain.

I sent a card to one of my best friends’ last week. I got a message from her that stated “…it was a delight to see your handwriting, always instantly recognisable on the doormat.”

To be honest my writing is a bit shit. But, having known me all my life, my (some might say) indecipherable, looping hand was known instantly. It made me feel rooted. Grounded. Loved.

And, that’s the truth isn’t it? Handwriting is so unique. So personal. I too received a card from my great friend recently and the kids bounded to the doormat, keen to find out if the pretty envelope was for them. I told them it was clearly for me. “But, how do you know?!” they asked. I refrained from a sarcastic reply full of expletives telling them that the name on the front was mine and not any of theirs (now is not the time to be questioning the state of our education system!!) and instead told them I knew exactly who had written the name and address as I knew the writing so well.

Our children are at risk of never having that. Of never having the feeling of seeing a card on the doormat and knowing instantly who has taken the time to write a few words of love, encouragement, thanks or a note that simply shares news. Modern technology is happening. Email is happening. FaceTime and Zoom is happening. All great. All wonderful and a brilliant way to feel connected with loved ones in these strange times. My Zoom meetings with friends are like lifelines just now. But, there is something so enchanted about the written word. Something so magical about a letter arriving on your doorstep from far away.

My mother’s writing sparked a warmth initially. Before the sadness crept in. Joy and safety were the first emotions – it was like a bolt of electricity, seeing her beautiful large capital lowercase a’s and her pretty, swirling s’s. I was thirsty for more and so went in search of more writing and found notebooks she had been writing in throughout the early stages of her dementia. The writing was spidery, less contained, a bit wild. As were the thoughts and feelings captured in ink. My thirst was suddenly quenched. The joy extinguished. The memories too real.

Reality hit and I text my friend. Her dad passed away last week after a brief battle with Covid-19. I have been thinking about her and her family a lot over the past few days.

“My one piece of advice,” she replied. “Is make sure you talk. Talk about the difficult stuff.” She said. She went on to mention that they had always joked about death, skirted around the topic, but now it’s happened they have so many questions about his wishes. Questions they simply don’t know the answer to.

On today’s walk in the remote woodland of Lanarkshire, I tentatively broached the subject with my dad. “It’s important we talk about it, Dad,” I said. “Even just the little things like, where you want to be buried or your ashes scattered. Have you thought about it?”

After a bit of huffing and puffing and dodging the question he eventually responded, “I’ll write it down.”

I hope he does. That he takes pen to paper and writes his thoughts, his beliefs. That he writes his memories and his wishes for us all. “Write it,” I said. “Don’t type it. Don’t email. Write it in a notebook or on a document.”

I know one day, I will devour his slightly unintelligible, familiar hand with thirsty enthusiasm. But not until I have tried and tested every possible cancer-beating, cancer-reducing, cancer-starving diet on the market.

If there was anytime to become an expert on something. I suppose it is now. 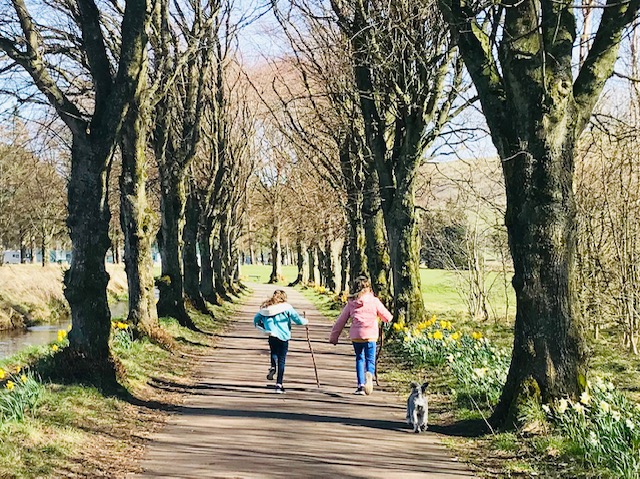 Miss you, Mum. Every day.

4 thoughts on “Operation “Save Dad” Begins!”