We are just back from a family holiday to the beautiful island of Kefalonia. A family wedding (father-in-law’s), 30-degree sunshine (sweaty, bouffant hair), a swimming pool (happy kids), gorgeous Greek tavernas (happy adults), chilled red wine (happy me), Peter Andre (we took secret snaps) and the most amazing turquoise seas.

It was a much-needed week of heaven.

About a year ago, Hubby and I went away to Italy and whilst there, my mother went walkabout. She was found several, frantic hours later – by a heat-seeking police helicopter – in a ditch, stuck to a farmer’s fence as she couldn’t untie her shoe (read about that particular dramatic incident here).

I didn’t think anything would happen whilst we were away this year.

I didn’t think dementia had anything left to rob me of.

I didn’t think it would attack my dad too.

Dementia was sneaky this time. It was sneaky with my mother too and we only recognised its arrival once it was too late, but this time it slipped its noose-like arms around my father and pulled hard. He was trying to lift my mother, trying to show dementia he could cope, when it became too much and as we had all feared, he suffered.

My father has damaged his back whilst lifting my mother’s waif-like frame. He has had visits by the emergency doctors, osteopaths, chiropractors and occupational therapists. They have fitted his toilets with higher seats and the kitchen and bathroom sinks with supports. He has a Zimmer frame for upstairs and a Zimmer frame for downstairs and he cannot be left alone as he is, apparently, at a very high-risk of falling.

Well, the good news was that the home called a week ago and there is a full time space for her. My dad battled with his unwarranted guilt, but decided to accept the place, on the proviso he could take a couple of weeks to get her things ready; to take his time in adjusting to the decision; to take his time to say goodbye.

He didn’t get his time.

She has gone into the home. Rushed. Early. Unprepared. Only a small handful of her garments have had her name labels carefully ironed on by my father. Her personal belongings quickly and hurriedly gathered together.

I should have been there. I was going to be there. I promised I would be there.

You robbed me again, dementia.

Perhaps it is for the best? Perhaps the distraction of my father’s current predicament will ensure that the shock of my mother’s new predicament is softened somewhat.

We spent the last week, oblivious (for the most part) of my family’s new and difficult drama as it unfolded. We were very lucky to share our week with Hubby’s brother’s family, along with my sister-in-law’s mother and friend. The two “oldies” were utterly fabulous, fun and completely wonderful with all five children. It was nice to feel mothered all week, nice to feel looked after and protected – we even star-spotted (is that the right word?!) Peter Andre in a restaurant with his wife and daughter!

The presence of a mother figure was comforting and reassuring. But, it was also a constant reminder of what I and my children have lost.

We knew it was coming. We have known for two years that my mother’s decline would end up with her living in full time care, staring into space, listening to nothing but the confused thoughts and disjointed memories in her own head. Hearing nothing that makes sense and speaking no words anyone can understand. We knew it, but I suppose we never actually envisaged it happening. It would always be in the future, something that would stay one step ahead of us all the time.

Dementia caught up with us.

It robbed us again. First it took her thoughts away and then her ability to speak to us.

Now it has taken her body away from us too.

It’s too late for my mum, but please, dementia – please leave my dad alone. 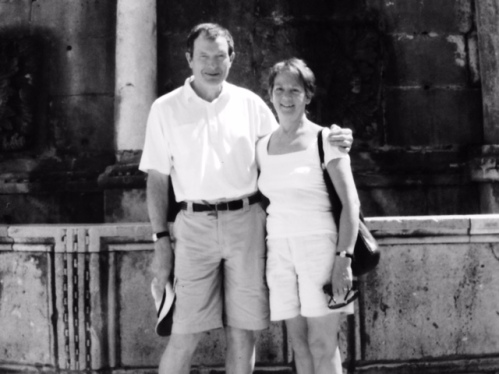 7 thoughts on “How Dementia Has Robbed Us Again”