I’ve always loved ABBA. I think I was born with the melodies flowing through my veins. One of my first memories was of my mother doing yoga in our dining room, her long rope-type things strewn on the floor and ABBA playing on the record player.

We had most of the albums. I remember staring at the Arrival album cover and wondering if the two women squished in that helicopter actually thought the men were handsome. They didn’t seem handsome to me at the time.

Cliff Richard? Now he was handsome.

His album cover was one my sister and I would take out of the cupboard and swoon over. We thought he was dreamy. We used to kiss his image.

Did I really just write that?!!

I took my kids to see Mamma Mia 2 on Saturday. The UK heat wave came to an abrupt end as the heaven’s opened and I saw my opportunity and grasped it, before the sun came out again.

I enjoyed the first film. A happy, inoffensive tale about a girl and her mother who doesn’t know which of three men is her daughter’s father.

I thought this would be much the same. A chance to laugh and sing along to some lesser-known ABBA songs. Ones I was confident I would know. I mean, I know them all!

Then the film started. My kids were armed with sandwiches (I’m far too like my father to buy them food there, we always take a pack-up!) and a few sweeties and I was surprised to find myself feeling a little emotional as the old familiar tunes started.

And, well…..it just got worse. The story was better, sadder and more intense than the first film and the music, which reminded me of my mum, combined with the story itself sent me over an emotional cliff before we were even half way in. I’m trying not to spoil it for anyone, but ….. skip the next sentence if you don’t want to know…

Bloody hell. It was a tough watch and I didn’t even take tissues, thinking it would be a funny, happy story about having babies.

I loved it though. And, it has haunted me these past few days. The grief, loss, pain and joy at the memory of a life well lived – and a love that cannot be broken or dampened by death – was uplifting and heart-breaking, all at the same time.

Watching the young Donna (Lily James – who was just fabulous, by the way!) enjoy her youth, full of hope for the future, filled with adventure and fun and potential to be anything she wanted, made me sob my heart out. Comparing her to my mother, who had also once been a young, care-free, head-strong girl with a life of adventure and love ahead of her was inevitable.

Both didn’t deserve their fates.

Both had lives still to live and families to love.

I know it’s just fiction. I know I’m being a bit dramatic. But it hit a nerve.

We were invited to sing along and dance if we wanted to, by the girl who came in and introduced the film at the start. There were only a handful of us in the audience at 11am in the morning and most were in their 60’s or older. We all sat quietly. Until the point where Dancing Queen came on and I couldn’t help but sing along. Loudly.

The kids were horrified.

Mum would have danced. She’d have bloody loved it!

I went up to Scotland last week. My dad had been down visiting for the last week of school and all of Archie’s exciting parties and assemblies that were thrown for the year 6 leavers. We had a super week. It was time to take him home again.

My sister also came up, so my dad had 5 children and his two daughters with him for four days. Oh, and my sister’s 4-month old puppy. The sun shone, the kids played in the sprinkler in the garden, we had a few days’ out. And, we visited Mum. 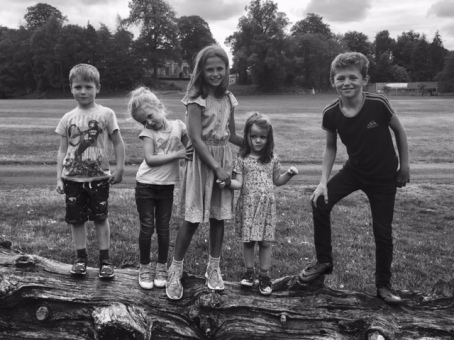 The first time, we couldn’t get her to open her eyes. She was slumped in a wheel chair, her head lolled forward and despite a few mumbled sounds, we got no response from her. Emma found it tough. We all did, I suppose, but she struggled to keep her shit together. Seeing my little sister struggle to keep her emotions in check made me struggle with mine. Archie thought the idea of food would help bring her into the room and so started a shrill and upbeat call of:

My mother did twitch at the sound of red wine, but other than that we got nothing.

The second time we went, we found her in exactly the same position. Slumped in a wheel chair in one of the living rooms. We held her hand and talked to her and decided to wheel her through to her bedroom where we could put some music on and try and get her to open her eyes.

So, 3 adults, 5 children, 2 dogs and a tiny, frail, hunched woman in a wheelchair traipsed through the narrow corridors to her room. The other residents cooed and ahhed at the sight of so many small children and reached out to them with their gnarled fingers and translucent skin. The kids were well behaved and didn’t react, other than a few forced smiles here and there. 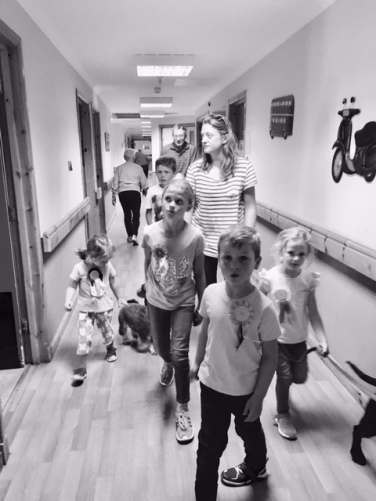 “Breakfast time, Granny!” Archie shouted as soon as we were in her room.

She opened her eyes and smiled at us. Not a smile of recognition, more a smile for a stranger, but a smile nonetheless. She watched the children for a few moments and her eyes closed again.

Her eyes opened sleepily again. A smile again and a mumble of something unintelligible. We put a Fleetwood Mac CD on the stereo, (there was no ABBA) and Lindsey Buckingham belted out “You Can Go Your Own Way” while we all forced a joviality that is impossible to feel when visiting my mother. In a care home. Needing full time care in every way imaginable. Who cannot speak. Who cannot walk. Who doesn’t know who we are. Who doesn’t know her own grandchildren. At the age of just 67.

It’s hard to find any of that funny.

My kids loved Mamma Mia but they were confused about why and how Donna had died. Martha has asked me about it a few times since. “Did she die of old age?”

“I wouldn’t have thought so, darling. I don’t think she was very old.”

“Well, do you think she fell off a cliff?”

An image of the young and beautiful Cliff Richard popped into my head and I wanted to sing “We’re All Going On A Summer Holiday” in my best Cliff voice. I didn’t. “No, I don’t think so, darling. I think she was probably poorly.”

“Yes, possibly. Cancer or something.”

Yes, it bloody is. And so was the film. But for almost two hours I let the tears flow, I remembered my mum playing those old ABBA songs as she forced herself into weird yoga positions and I let the young Donna remind me of my mum, as a young woman, bursting with adventure and opportunity.

It was heart-breakingly fabulous and I loved it.