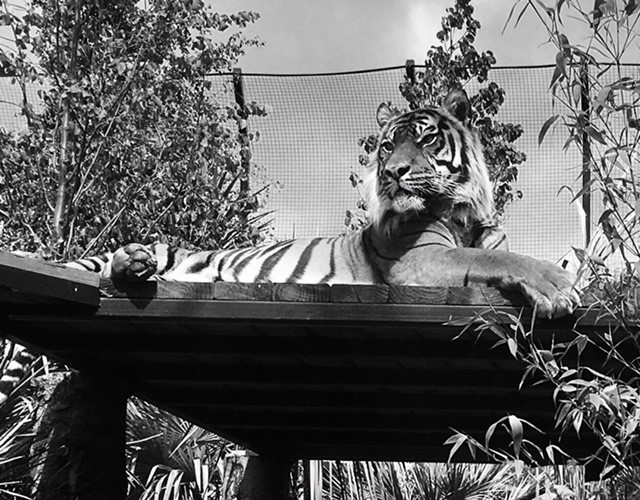 There is a proven way to survive if you should encounter a hungry tiger whilst out and about. 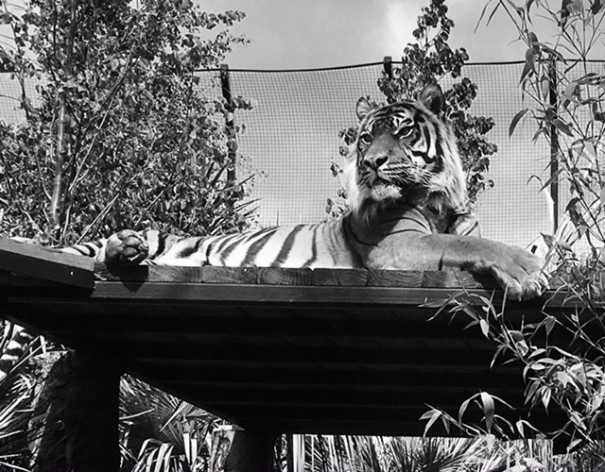 This was news to me, and if I’m honest, wasn’t something I had given much thought to, given my infrequent interactions over the years with these fabulously magnificent beasts. But, it was a piece of information I relished hearing and I now feel a bit more “Bear Grylls” than I did a few days ago.

It all started with a trip to Edinburgh Zoo. Well, that’s not true – it all started with my mother’s very poorly brain, two years of rapid deterioration and her abrupt move into a care home. The piece of valuable tiger-survival information came about whilst on a trip to visit my stricken mother and provide comfort and company to my father. My sister and I, along with our five over-sugared children (and with Dad in tow), decided on a day out. A day away from thinking about Mum in the care home and witnessing her tiny frame, hunched in one of the blue, high backed, easy-wipe fabric chairs. A day of normality. A day like ones gone by; of picnics and expensive take-away coffees; of not enough coats or far too many; of someone wearing the wrong shoes and complaining of a blister ALL day; of trying to fit too much into one day and regretting it by tea time; of excessive amounts of chocolate and crisps (that are surely justified due to the amount of walking done); of over-tired, fractious children and the agreement that no one would cook later, only a take-away would do. 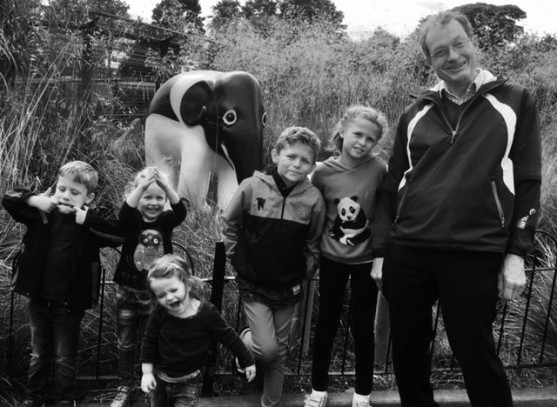 Mum would have loved it!

The zoo was at times a little depressing, if I’m honest. Some of the enclosures are fabulous and the animals look happy and have relative freedom. But, some were not fun to see. There was a small bear pacing. Just pacing. Back and forth with an occasional glance at the over-excited children banging on the glass of his home, before he began pacing again.

And the rhino – who was absolutely magnificent – he kept walking into his “house” and a few minutes later, he would walk out again, treading the same path each time; straight in, turnaround and straight out again. Each time it was a real treat to see him and his hugely impressive, prehistoric bulk negotiate the turns in the relatively small enclosure, but, at the same time, it felt a bit sad.

It was as we were catching a rare glimpse of one of Edinburgh Zoo’s pandas that we learnt our new tiger-survival technique.

“The tigers,” Archie replied. No hesitation at all.

The chap went on to explain he used to work with big cats in a previous zoo and asked if we knew how to survive should we ever encounter a tiger.

“Pretend to be dead?” Martha suggested.

“You may as well cover yourself in sauce,” Panda-Man replied, laughing.

He teased us (rather annoyingly) for the next few minutes, as we guessed increasingly stupid ways to dodge being eaten by a tiger, as he herded us up the pathway towards the gate. As he locked the gate behind us, he spilled the beans.

“Open your eyes as wide as they will go and stare into its eyes,” he declared dramatically.

Staring into a tiger’s eyes will deter it from attacking you. Children in Africa walk to school with huge eyes painted on masks strung to the backs of their heads and this has lowered the number of tiger attacks in recent years.

They want to creep up on their prey, they don’t want to be caught in the act.

Now, it’s nothing I am ever going to put to the test, or not intentionally anyway, but it was certainly a fascinating fact to end our day on.

Now – I should probably state here for legal reasons, I am no expert and if you are expecting to encounter a tiger anytime soon, it’s probably best to seek professional advice and not rely on the ramblings of a mother of three from Yorkshire #don’tsuemeifyougeteaten.

Aside from the Zoo, we had other trips out and mini adventures with my father and all in all, the week was rather lovely.

As I was up visiting them the previous week, I had already seen my mother in situ and so was prepared for the sight (tiny and fragile and young; so very bloody young) and smell of her (not unpleasant, just different; she now smells like an elderly stranger) in her new home.

Emma was not and she found it tough.

Some days were tougher than others. The day when the sun shone and the breeze was warm and we tried to get her outside for some fresh air, was probably the toughest day. We eventually achieved our aim – to get her outside so she could feel the sun on her skin and hear the birds singing and watch our five kids charge about the small but picturesque lawn. She didn’t appear to notice though: The sun, the birds, the kids, the warmth, the garden – nothing registered. She saw nothing that day. Not even us.

What we hadn’t planned on was not being able to get her back in again, cue help from the lovely staff and the eight of us retreating back home, silently and deep in our own thoughts, with just Mabel piping up “when is Granny coming home?” and myself, my sister and my dad feeling the painful, mum-shaped void in every room in the house.

Yesterday was good though, she was up and about when we went in and smiled! It makes us so happy when she smiles – it is a relief that she is not distressed all the time and that occasionally there is a glimmer of happiness. When she smiles, we smile and we leave her there feeling we have done the right thing. 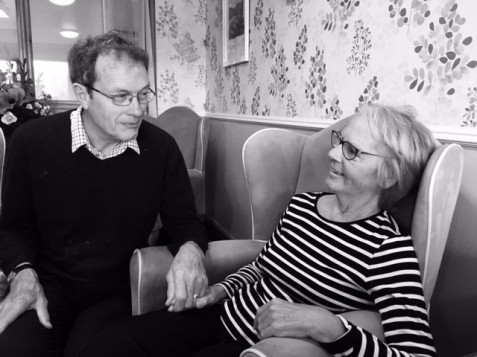 She was staring at Emma yesterday, through her smile, her eyes wide as if trying to take in as much information as possible; as if the bigger the picture, the better her understanding. As if her eyes could help her brain make sense of the picture in front of her.

Mum just continued to smile, her eyes glinting with mischief, big and open and as wide as she could get them.

Her eyes were one of the first signs of the disease, but we didn’t know it at the time. It is only now, looking back through photos that you can recognise the fear and the haunting look behind the eyes that was screaming out to us “DEMENTIA IS COMING!”

It matters not. Mum is now like the small bear, trapped in his glass-fronted enclosure, except the prison keeping her from her free, natural and beloved existence is her own failing brain. Like the bear, she spends her days pacing the corridors aimlessly, not knowing why she is walking or where she is walking. Like the bear, she glances fearfully around her environment, unsure of who anyone is, why they are looking at her, why they are poking at her and why they are messing with her.

Perhaps to my mother, even us – her devoted family – are like those over-excited children banging on the glass of the little bear’s enclosure. Perhaps she feels threatened by our presence, by our noise and constant chattering in a language she does not understand.

Like the little bear, Mum’s prison has damaged her irreparably and like the bear, it is heartbreaking to watch.

2 thoughts on “How To Survive a Tiger Attack”